Sorry for the lack of postings. Things have been very busy and very fun all at the same time. About two weeks ago I was honored to be part of a very special event, The Horror House pop up shop. Thank you to all those who came out and to all those who helped and to all those that were vendors. For those who missed out on this event, stay tuned to see when it’s happening again.

Along with that we also released a Tales from the Cryptic Closet, a horror anthology created by Vinny Malave and Moses Gibson of the Cryptic Closet and features talents such as Bill Halliar, Ben Miller, Adam Farster, Lisa Jones, Jorge Garza, Anthony Cleveland, Ashley Esper, and myself. This was the first stop of the signing tour. The next stop will be at Creative Comics 2 in Monticello,IN on Wednesday October 30th 12-5pm. The third stop will be at Scarlet Lane Brewing in McCordsville,IN on December 14th.

Along Tales from the Cryptic Closet being released. I am featured in the 2019 Marvel Premiere series from Upper Deck the set was released at the end of September and is available now a various comic shops. Another release of me is the Eddie Guerrero Spider-Man 300 inspired design at Pro Wrestling Tees. You can see this design below and is available now at prowrestlingtees.com 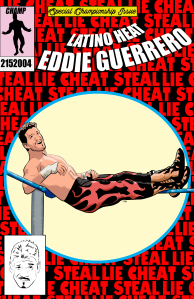 #wip #comics #comicpage #imdiecomics #roughpencils #pencils
#Repost @freelancewrestling @prowrestlingtees
New @thegoodbadguytamatonga shirt now available at @prowrestlingtees
musical sketchbook is now available digitally at @globalcomix hit the link to check it out https://globalcomix.com/c/book-of-voices-?lang=en
I’ll be with Guerrilla Publishing at @nwicomiccon Check out the map.
#Repost @prowrestlingtees with @shopaew @malakaiblxck @brodyxking @thejuliahart @snm_buddy
Oct 2023 will be the month of Deathbag as the next installment of the Epic Misadventures drops!
Crazy that this painting is 8yrs old it’s 8-9 feet long and 4 foot tall.
New House of Black sticker now available on @prowrestlingtees and @shopaew
#wip #comics #comicpage
Loading Comments...
%d bloggers like this: